So I read the story when it first came out in 2016, and managed to get tickets in 2017 for a show in 2018. I wanted to wait until I saw the stage production before giving you the full review. As of Wednesday 6 June, I am all Harry Potter’ed up.

It was always difficult being Harry Potter and it isn’t much easier now that he is an overworked employee of the Ministry of Magic, a husband, and father of three school-age children.

While Harry grapples with a past that refuses to stay where it belongs, his youngest son Albus must struggle with the weight of a family legacy he never wanted. As past and present fuse ominously, both father and son learn the uncomfortable truth; sometimes, darkness comes from unexpected places.

I’m genuinely obsessed with Harry Potter. I’ve grown up with it, watched the films hundredfold and read the books double that. Side note: my ex had never watched/read/had anything to do with Harry Potter and had no interest in doing such (an ex for a reason, clearly).

Harry Potter and the Cursed Child is something that all fans of Harry Potter should read/see. In general, there were a few things in the story itself that I didn’t like, but it’s still a 10/10 watch/read for me.

About the book/ story:

The production itself was crazy good. The audience knew that all the magical aspects were just good effects and tricks (or were they?!?!?!?!), but it didn’t stop it looking incredible. 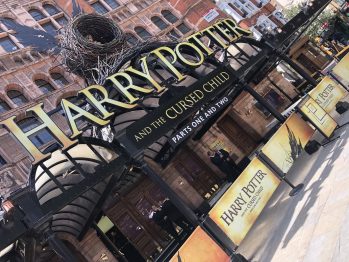 All in all, the actors performed impeccably, and if you hum the Harry Potter theme tune to yourself beforehand or during the break, and get over the fact that the main characters are not the ones you know them to be, it’s utterly perfect.

Bookmark That. Playmark That? Either way, go and read/see this. This instalment is a genuine joy.

Retweet on TwitterBookmark That Retweeted

“If he writes your name down, it’s a death sen

Is it acceptable to just write ‘wow’ 500 times

‪“It might be kinder for them both to leave hi

It was meant to be your daughter’s first sleepov

A dystopian romance which raises some troubling qu

An enjoyable thriller, but sometimes difficult to

The real monsters aren’t hiding in the woods - t

They say you can't choose your family, but what if

Is there a bookstagram award for the most wonkiest

‪A gripping psychological thriller which has you

Better late than never, AM I RIGHT?! Here’s my r

When the truth is worse than fiction, is the past